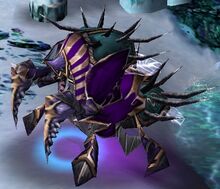 Anub'arak was the former king of Azjol-Nerub, but when Ner'zhul and his undead minions finally overwhelmed the ancient subeterranean kingdom during the War of the Spider, Anub'arak along with many of his kin were raised as undead in service of the Lich King. Now a cryptlord, Anub'arak is forced to obey the Lich King,slaughtering any who would oppose the scourge: including his former subjects, the living Nerubians.

Slams the ground with the Crypt Lord's massive claws, shooting spiked tendrils out in a straight line, dealing damage and hurling enemy ground units into the air in their wake.

Damage reflected does not mean damage blocked. Example: if Anub'arak takes 100 melee damage at level 5, 80 damage will be reflected to his attacker.

The Crypt Lord progenerates Carrion Beetles from a target corpse to attack the Crypt Lord's enemies. Beetles are permanent and can burrow.

Creates a swarm of angry locusts that bite and tear at nearby enemy units. As they chew the enemy flesh, they convert it into a substance that restores hit points to the Crypt Lord when they return. Effectiveness increased with level.