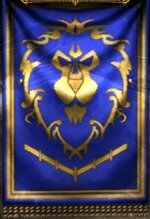 This is the human Kingdom of Stormwind led by King Varian Wrynn. Your Kingdom is located in the south-eastern part of the Eastern Kingdoms and the colour of your nation is Dark Green. The Kingdom of Azeroth was destroyed by the savage Horde in the First war. King Liane was slain and Anduin fled with the remains of this once proud human Kingdom to the north where he warned King Terenas of this new foe of humanity. The survivors of the kingdom of Azeroth joined the alliance of Lordaeron wich was found by King Terenas. After the war has been won, Varian the crown prince in exile came back with his people and reclaimed their homeland. From the ashes of this old human Kingdom a new one rose to lead the man of the south. This was the birth of the Stormwind Kingdom.

Stormwind is located in the south of the Eastern Kingdoms, with a portal leading to Outland at the south east area of your lands.

Obtainable on the House of Nobles, inside Stormwind´s Oldtown.