"Nothing he can say will make me abandon my homeland, Jaina."
-- Arthas Menethil 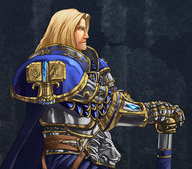 Arthas Menethil, Crown Prince of Lordaeron and Paladin of the Silver Hand.

Prince Arthas Menethil was the son of King Terenas Menethil II of Lordaeron. He was raised by his mother, Lianne, along with his older sister Calia. He was knighted into the Order of the Silver Hand, of which his mentor Uther the Lightbringer was a founding member, around the time the Undead Scourge started to appear in Lordaeron, and he and Uther have began to fight back.

Hits enemy units with a blast of Holy power.

An impenetrable shield surround the Paladin, protecting him from all damage and spells for a set amount of time.

Increases the life regeneration rate of nearby friendly units.

Arthas unleashes all his fury in a storm of force to enemies very close to him.