Balnazzar is one of the three nathrezim siblings left behind in Lordaeron to oversee the demonic conquest of that land. The return of Prince Arthas, following the defeat of Archimonde, sent the three brothers packing, but they quickly regrouped and concocted a new plan to destroy Arthas once and for all. 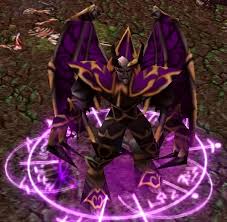 Calls down waves of fire that damage units in an area. Each wave deals initial damage and then burn enemies for 3 seconds.

The Dreadlord lets loose a terrifying howl that causes nearby enemy units to shiver in fear, reducing their attack damage.

The defensive prowess of the Dreadlord give a percent chance to block damage.

Calls an Infernal down from the sky, dealing damage and stunning enemy land units in an area.