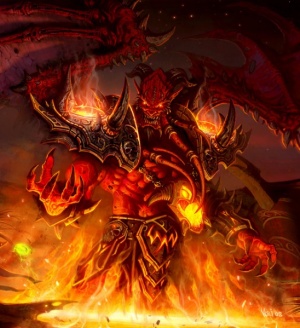 The Burning Legion is the combined force of the Demon Horde that was controlled by Sargeras, a corrupted Titan. Since his defeat, his lieutenants, Kil'Jaeden and Archimonde assumed command of the Legion, and are now trying to conquer the planet of Azeroth, with the aid of the Undead Scourge. You start weak, but after your full army is summoned into the world you will become extremely powerful. You and your ally the Scourge (Red) need to destroy Lordaeron (Purple), Quel'thalas (Green) and Dalaran (Orange), the Human and Elven nations of the North Alliance to obtain the book of Medivh, or corrupt the Sunwell and summon the Legion there. You start with two heroes, Mal'Ganis and Tichondrius, and one Demi - Hero, Jubei'thos. If you lose Archimonde and Kil'Jaeden, you will lose control of your units and buildings as well so it is important to keep them alive at all costs. However if you do lose both Great Demons you will have a second chance with the Dreadlords Balnazzar and Detheroc.

The Burning Legion (Blue) starts in a similar situation as The Undead Scourge (Red), divided into 2 bases:

The Burning Legion (Blue) is a very delicate faction to play with, most things tend to go wrong if your ally doesn't know how to play, in the recent versions The Burning Legion has grown out of being only Dreadlords early in game to a full faction, which helps a lot in making the game easier.

At first you will need to divide your attention between farming Northrend and trying to survive in the Northern Kingdoms. You will have 2 options at the start, you can either help The Undead Scourge (Red) and destroy Purple forces faster or focus to try to siege Dalaran, while The Undead Scourge (Red) holds or destroys Lordaeron's forces on it's own.

If you have chosen to focus on the siege of Dalaran and that worked, you will be able to summon Archimonde and their demon forces into the world. With this your forces will be able to train extra units like Doomguards and Infernals and you will receive Archimonde a very powerful hero, with this, you can be of great help to the Scourge against the forces of the North Alliance.

If you have chosen to help the Scourge's forces you can use your Northrend units to attack Stratholme or the Lordaeron Palace, giving Red the opportunity to get Arthas Menethil as a Death Knight. Use your Transport ships, Battleships and Frigates to get to Stratholme or Lordaeron Palace, if Red has already won against Purple you may use this same tactics against the forces of Quel'Thalas and Dalaran (If wasn't destroyed) to secure the entirety of the Northern regions and finally summon the Burning Legion.

After conquer all Northern regions and finally summon the Burning Legion, you have 2 options:

You can go to Southern regions and fight against Fel & Dark Horde (Teal) or the South Alliance (Stormwind and Khaz Modan) because they will be a big problem if you don't stop them but with the help of the Undead Scourge, it won't be to difficult. Then you can focus on take Kalimdor, especially to claim the World Tree.

You can go to Kalimdor and fight against the Night Elves (Sentinels and Druids) to claim the World Tree and make Archimonde unstoppable (You will gain +8 levels to Archimonde). With the power of the World Tree, you can take easily the army of South Alliance or the Fel & Dark Horde.

Always be sure to protect the areas of Northrend with Battleships and Frigates because you can't know how and when the enemy is going to attack you, especially in Northrend because they will try everything to take your ally down and as a consecuence, you too.

Burning Legion's composition varies dramatically during early, middle and late game because of his summoning, Most people use only Archimonde, replace the Dreadlords for the Doomguards as main Elite units, and use the revivable heroes (Tichondrius and Mal'Ganis) to scout before sending Archimonde in.

Every control group require to train elites, melee, casters and catapults to defeat the main enemy (Depends of the moment) Some examples are:

Before Summon the Burning Legion

After Summon the Burning Legion

Heroes: (When the Legion is Summoned)

After the Death of both Great Demons: