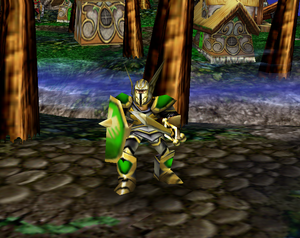 The Elven Warrior is the main starting melee unit for the High Elves. He is rarely used as the High Elves focus is on ranged units; though he can be a moderately effective meatshield for covering archers and support casters. Especially when backed up by upgraded Priests.

Raises the shield to block incoming arrows and other piercing projectiles; Although it's pretty effective, it greatly reduces the user's speed, as they need to keep the shield firm and up.

The lithe High Elves of Quel'Thalas practice precison even in the brutality of combat, allowing them to occasionally evade attacks.