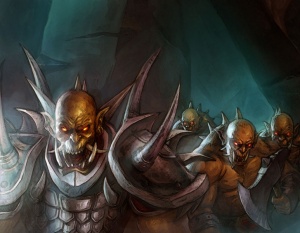 The Fel Horde of Outland was created when Kil'Jaeden the Deceiver persuaded Ner'zhul to accept demonic powers in exchange for territorial expansion and dominance over Outland. Consequently, the fel orcs slaughtered most of the Draenei and constructed two major fortresses on the planet. One was primarily a staging point for assaults on Azeroth (Hellfire Citadel), while the other served as a hub of demonic activity (Black Temple). The Burning Legion directed the Fel Horde to destroy all the human nations and the world. The Dark Portal opens to the southeastern Kingdoms, which is guarded by Kingdom of Stormwind. The Fel Horde of Outland has assimilated the Blackrock Orcs into their army.

The Fel Horde starts on a Outland, formerly known as Draenor, which is rich in gold and creeps but you are also expected to control the Blackrock clan with its primary base wedged between Khaz Modan and Stormwind. Because the Kingdom of Stormwind is the stronger of the two, you can attack it from two sides. Your primary focus is southeastern Kingdoms cause is the link to Outland, and it's vital that you manage to connect your main forces from Outland with your fortress on Blackrock Mountain.

The Fel & Dark Horde (Teal), is often considered to be one of the most difficult races in Azeroth Wars Legacy Reborn, both because the initial fight can be difficult, particularly when you are facing an enemy team that cooperates well together and because it is difficult to transition well into the middle part of the game on solid footing. It is difficult to both utilize your units well ("Microing"), and to set up bases, infrastructure, build units, and more things to fight two potential factions ("Macroing"). It is generally said that the Fel & Dark Horde (Teal) is a disadvantage the longer the game goes on because playing the race well takes both skill and stamina.

Although the Fel & Dark Horde is one of the more challenging races, it's appealing to some people for its difficulty.

In the early game, there are many different strategies to employ in the siege of the South Alliance. The best ways as it is seen by most of the players are:

Your army must be composed especially by all the Spellcasters, Grunts, Succubus and other units that you think might be of great help.

Throughout the many versions of Azeroth Wars, Fel & Dark Horde's players oscillated from rushing the South Alliance through quick, well timed pushes. Other players have opted to creep all of Outland to get a powerful army but with the risk that your enemy can organize their strategy.

In the middle game, is possible to hunt down and crush the remaining of Stormwind and Dwarven resistance after the siege of their main buildings. In that moment you have to make Magtheridon revivable (After Stormwind and Khaz Modan's Siege) before they will try to take him down.

Then you can build a large navy on the west coast of Eastern Kingdom to scout for possible Kalimdor attacks, build a forward base near Stromguarde, research the upgrades of the weapons and spellcasters, organize your army again, and then land and capture islands. It helps tremendously to build bases wherever you can to delay Kalimdor and to stop them from town portaling as easily. After you kill one player your control point count should rise fairly quickly.

In the late game, you can attack in different places after getting 30-33 control points. If Red and Blue are winning, it can be very good to start sending a boat with peons to Northrend even before Stormwind City is dead. You can build a base in Northrend, teleport there and attack the Frozen Throne even before Red and Blue are finished fighting. If the North Alliance is winning, it is usually a good idea to attack Orange as soon as possible.

In the late game, Teal primarily relies on its incredibly powerful hero group. After so much land area is acquired it is increasingly pointless to build units everywhere; it is better to simply use town portals liberally and reinforce them from existing bases as needed.

Fel & Dark Horde's unit composition varies during the early game. Against Stormwind (Dark Green) and Khaz Modan (Yellow), most people do not build Burning Blademasters (Unlike other races in the beginning). For blitzes, it usually helps to get a large number of necrolytes and melee units. For more patient Teal players, who would rather not rush Dark Green or Yellow, it is usually advisable to have a more ranged/caster composition; though Teal's unit composition varies considerably in the early game.

In the middle game, it is required to build casters, catapults, and even air units to defeat more than 3 players. One set up is:

Researchable on the Throne of Kil'Jaeden in Hellfire Peninsula.