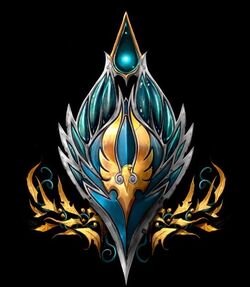 The High Elves of Quel'Thalas are a proud magically gifted race descended from the Highborne that sailed from Kalimdor thousands of years ago. These ancient Highborne eventually settled in Northern Eastern Kingdoms, finding a forest so beautiful that they decided to claim it. The natives of this new land, the Amani Forest Trolls, did not take kindly to this. After many battles the High Elves eventually formed an alliance with the Human Nation of Arathor. In return for defeating the Trolls, the High Elves taught Humans magic. This began the Alliance between Humans and High Elves.

In the game, the High Elves have the colour green. They start out entirely inside Quel'Thalas, with some Troll creeps in Zul'Aman. Their unit lineup consists mostly of ranged units, spell casters, and a few melee units. They control two heroes, Sylvanas and Anasterian. If Silvermoon falls, they will lose those two heroes but gain Kael'Thas and the Blood Elves. They are allied with Lordaeron and Dalaran, and the primary enemies of green are the Burning Legion and the Scourge.

Quel'Thalas is located on the northernmost tip of the Eastern Kingdoms. The High Elves begin with two allies.

Heroes: (if Silvermoon is destroyed)