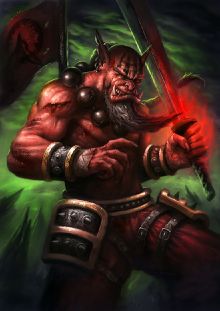 Jubei'Thos, a Fel Orc Blademaster, took up leadership of the Blackrock clan orcs in Lordaeron during the Third War. Jubei'Thos didn't join Thrall when he made the new Horde, because of his devotion to the Burning Legion and acceptance of Warlocks in his Clan.

Causes a bladestorm of destructive force around the blademaster, rendering him inmune to magic and dealing damage to nearby enemy land units.

Gives 15% chance to do 2 times normal damage on an attack.

When killed, Jubei'Thos will come back to life.

Reduce the duration of negative spells and renders the unit inmune to certain spells.