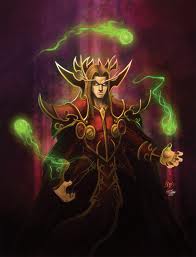 Kael'thas Sunstrider is the last surviving heir of the Sunstrider Dynasty, and one of the few elves lucky enough not to be in Quel'Thalas when Arthas drained the Sunwell. Renaming his surving brethren the Blood Elves, Kael fearlessly led his people to a new future, where the could sate their thirst for magic. Kael led his people to Outland, where they siphoned energy from the demons roaming the shattered realm. Kael'thas allied with Illidan and his minions, and captured Tempest Keep to use as his primary base. Eventually, Kael'thas became more and more corrupted until he eventually went mad with power; betraying Illidan and his people by allying with Kil'Jaeden the Deceiver.

Conjures a pillar of fire which damages ground units in a target area over time.

Turns a non-mechanical unit ethereal and slows its movement speed by 50% for a short duration. Ethereal creatures cannot attack, but they can cast spells and certain spells cast upon them will have a greater effect.

.Summons a powerful Phoenix. The Phoenix burns with such intensity that it damages itself and nearby enemy units. Has Spell Immunity, and Resistant Skin. When a Phoenix dies, it creates an egg that will hatch into a Phoenix. 1 more Phoenix is summoned per level.