As part of the Unified Community Platform project, your wiki will be migrated to the new platform in the next few weeks. Read more here.

"You may not care for your subjects, but I care for mine. I have lost far, far too much in dealing with humans. I stand only for the elves now - for the sin'dorei. The children of the blood."
-- Kael'thas Sunstrider 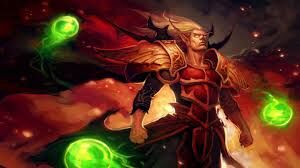 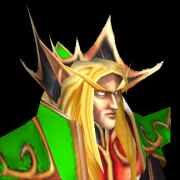 Prince Kael'thas Sunstrider, son of Anasterian Sunstrider, is the last remaining heir to the throne of Quel'thalas. He has renamed his people the Blood Elves, in honor for their slaugtered kin. Although he fought alongside the Alliance of Lordaeron, Garithos' racism and lack of military intellect forced Kael'thas to ally the Naga. Learning this, Garithos sentenced Kael'thas and all his army to death. However, Lady Vashj rescued him and his people in time, and led them to Outland, where Illidan Stormrage taught them to feed off of demons to sate their magical addiction.

Casts a massive fire that burns enraged for 3 seconds; After that the ground remains burnt for other 6 seconds, damaging units on the area.

Target unit becomes ethereal for some seconds; While in this state, the unit has 50% less Movement Speed and can't attack, though it can cast spells. Any Magic damage/healing recieved is greatly increased.

Kael'thas leeches mana from an enemy unit, or transfers mana to an allied unit.

Summons a fiery Phoenix that burns with such a intensity that it damages itself and nearby enemy units. When the phoenix dies, an Egg will appear. After a few seconds, a new Phoenix will be reborn from the Egg.