"Your curiosity will be the death of you."
-- Kel'Thuzad 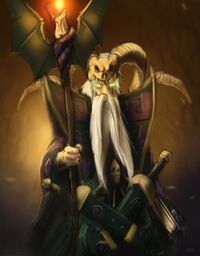 Kel'Thuzad, leader of the Cult of the Damned.

Kel'Thuzad was the founder of the Cult of the Damned and one of the principal agents of the Lich King responsible for the spreading of the plague of undeath across Lordaeron. Originally a human mage of the Kirin Tor, Kel'Thuzad was swayed under the influence of the Lich King. After bringing the plague to Lordaeron, he was slain by Arthas Menethil.

As hero, he recieves no upgrades, however, there is Event, which let transform Kel'Thuzad into his more powerful version.

Gives a permanent bonus to Agility, Intelligence, and Strength.

Just a way to spend skill points after all abilities are maxed up.

Blasts enemy units around a target enemy unit with a wave of damaging plague that slows movement.

Because of no damage cap, this ability might be extremely useful against packed group of enemies. Cost and Cooldown are relatively low, so ability can be spammed, however, for best Slow utilization, it may be tactically wise to save ability for moments of chasing enemies which are about to retreat, or slowing down enemy melee units which charge on your ranged troops.

The hero utters mystical words, increasing the magical powers of nearby allies, by restoring thier mana points.

With no mana cap, this ability may one or even two times per combat give allied casters opportunity to cast 1-2 more powerful spells (like summon combat units), so the more casters around Hero, the more it incredibely effective. To utilize this ability well, one need at least 10 potent casters around.

Sacrifices a target friendly Undead unit to convert its hit points into mana and health for the caster.

Very good ability for Hero to stay alive and potent during combat. However, it is questionable, whether to consume regular units, which costed you time and gold, or not. It depends on situation. During fights, you may always consume summoned units, which will be dismissed after anyway. On high levels of ability, even summoned unit (with not so many health) is enough to be sacrificed. In critical situations, to prevent permanent Kel'Thuzad death, you may consume even strong regular units, like Abomination.

Damages everything (both allies and enemies) in its area of effect by a percentage of its base hit points per second. Also destroys trees.

Ability has many ways of utilization (both offensive and defensive), and guarantees, that affected units which stay long enough in area of cast, have no chance to survive. However, the fact it affects your allies too, may lead to silly spoiled teamfights, due to unskilled player ability usage. It has notably long cooldown, and swift enemy reaction with single disable (like stun) will interrupt ability, which could apply tons of damage for 35+ seconds.