Kil'jaeden the Deceiver is a powerful eredar demon lord and is the current acting leader of the Burning Legion. He was selected twenty-five thousand years ago to be the chief lieutenant of Sargeras, he is ranked above the demon lord, Archimonde. While Archimonde leads the Legion's armies, Kil'jaeden's agenda is to assimilate every race possible into the folds of the Burning Legion. Since the apparent banishment of Sargeras, he has assumed the role of supreme commander. 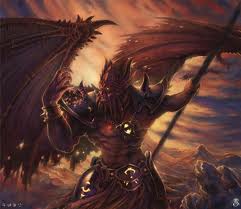 Calls forth a cone of energy utterly destroying enemies.

Calls a Meteor down from the sky, dealing damage and stunning enemy land units for 2 seconds in an area.