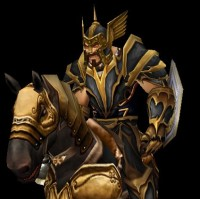 Lord Othmar Garithos was the only son of Baron Garithos of Blackwood, which borders Quel'thalas. He joined the Lordaeron army during the Second War, and while defending Quel'thalas, a small band of orcs attacked Blackwood and burned it to the ground, killing all of its inhabitants. Garithos blamed the elves for the loss of his home and family, thinking that they had diverted troops that could have been used to defend humanity. After the war, Garithos inherited his father's title and continued his service in Lordaeron's military, eventually rising to the rank of Grand Marshal.

A wave of force that ripples out of the Hero, causing damage to land units in a line.

Garithos rallies his men, increasing their movespeed drastically for a short period of time.

Gives a chance that an attack will do 25 bonus damage and stun an opponant for 2 seconds.

Calls upon waves of brave knights to charge into enemy ranks.