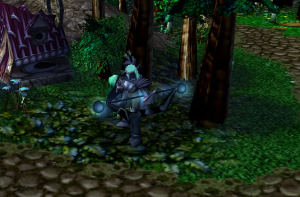 Shandris Feathermoon is the General of the Sentinel army, and the right hand of the High Priestess Tyrande Whisperwind who she also sees as a mother to her. Alive when the legion first invaded, the demons killed her parents and Tyrande took her under her wing. Growing up, Shandris has proved to be perhaps the best archer in all of Azeroth, unmatched by all, save perhaps the Windrunner Sisters. Shandris commands the Sentinels with a strong will against any enemy, be it human, orc, or demon.

Fires and arrow that stuns the target and does significant damage.

Shandris gives additional armor to nearby friendly units for 25 seconds.

Increases the movement speed and attack rate of nearby friendly units.

Shandris lets out a Battle Cry giving nearby friendly units a bonus to attack damage and defense.