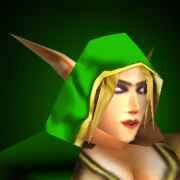 Sylvanas Windrunner, Ranger-General of Silvermoon and sister to Alleria and Vereesa Windrunner, is the best archer in all of Azeroth. She guards over Quel'thalas with her rangers, ready to intercept any incoming threat. After helping defeating the Horde in the Second War, she now guards Quel'Thalas with vigilance, quickly subduing any threat that should arise--most often from the Forest Trolls lurking inside Zul'Aman.

In game, Sylvanas is an Agility-based hero, and a deadly hero-aimer. While initially she is fragile, with the proper items and spells she is perhaps the best hero assassin in the game. A common tactic is to invest primarily in Trueshot Aura/Pinpoint Shot, with atleast one point in Wind Walk in case she needs to escape from danger. At Level 10, damage increasing Items become 4x more effective when used by her, and at level 15 they become x7 more effective with her Multi-Shot spell.

Sylvanas' leadership and archery skills allow her to boost nearby ranged unit's accuracy, allowing them to be more deadly.

Sylvanas' mastered skill with her bow allows her to fire multiple arrows at a time, each specifically directed to a target.

Sylvanas is lost forever when Silvermoon Palace is destroyed. If the Elven Runestones are dead and Red or Blue kills her, she will be raised as a powerful banshee to serve them.

If Red has killed and raised her, and later looses the Frozen Throne, Sylvanas ( now undead) and a small group of undead will spawn on the shores of Lordaeron as a second chance.