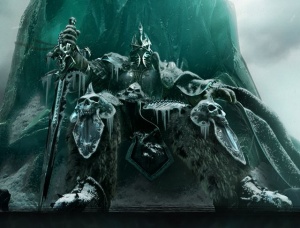 The Scourge is a vast army of the undead created by the Lich King — the being formerly known as the orc shaman Ner'zhul. Under the control of the Burning Legion, the Scourge's mission is to spread terror and destruction across the world in anticipation of the Burning Legion's inevitable invasion. The Undead Scourge quickly became the dominant power on the continent of Northrend, having subdued the native subterranean Nerubian Empire.

It has, however, lent forces to the dreadlords Tichondrius and Malganis. Allied to, the Burning Legion, its sole purpose is to pave the way for Archimonde and Kil'jaeden to enter Azeroth unimpeded. The Undead Scourge's mission is to destroy the North Alliance, a human and elven faction who guard the precious Book of Medivh, which is used to summon the Burning Legion.

Heroes: (After the Frozen Throne is lost)